Winter just does not seem willing to let go of us, but slowly we are pulling away (very slowly!). Here and there this month we have experienced warmth and sunshine, but as recently as two days ago we also experienced two nights of frost. So far, for the month of May we are experiencing rain about every 2 ½ days.

The conditions have meant that a little more time than planned could be spent at the loom. Here is the last blanket, just before it was finished. It is a traditional Goose-Eye pattern, utilizing a number of the natural shades of yarn from our flock. 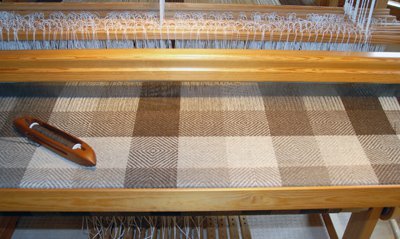 The rains have been significant enough that the ground is having trouble drying out. Earlier this spring I was distressed because I did not get most of our vegetable seeds planted and started indoors as early as I usually do. Now at least I can claim that “I planned it that way”. I have just begun to work the soil in the garden and continue to be delayed by the rains. In the meantime the seedlings in the house continue to grow. I think that I am beginning to hear screams from the tomatoes. The tomatoes are trying to do it without me, but I cannot raise the grow-lights any higher.

The pastures are finally showing some signs that they are getting serious about growing. The cool season grasses are now doing well and most of the legumes are starting to catch up. Whenever the weather has allowed I have been working on repairing the damages that winter is leaving behind in and around the pastures. Some damage is irreversible. Hiking across the south end of pasture #1 yesterday I came across what I thought, from a distance, was a dead seagull. Once I got close, I realized that it was a very dead  Snowy Owl. 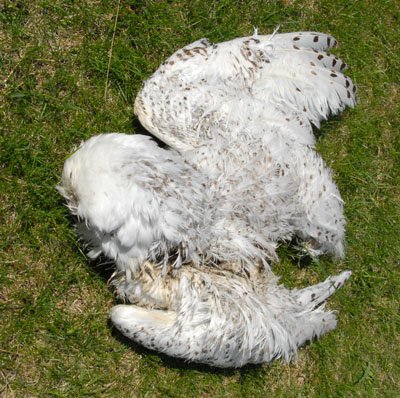 Throughout last winter we regretted not seeing a single Snowy Owl, especially with the numerous reports of their appearance all along the eastern coast line of North America. Ironically this owl was probably here quite early in the winter, even though we never saw it. Where I found it, the body would have been buried deep in a snow drift east of the higher level of the main pastures.

Most of the repairable winter damage has been related to water lines and fences. Every year, in late fall, after we bring the last of the sheep in from pasture, we try to drain as much water as possible from the above ground water lines in the pastures. There is usually a couple of low spots that do not drain completely. If they are up against a fixture, the resulting ice plug will push the fixture off, despite the clamps. I come to expect a couple of these disconnects each winter. 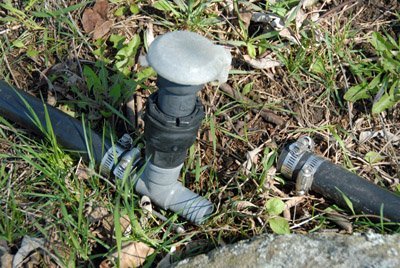 What I found this year, as I walked the entire water line (which is over a mile long), was beyond belief. At least half of the plug-in fixtures were blown/pushed off the pipeline. In pasture #1 alone all six of the plug-ins were disconnected. With that many disconnects, it was obvious that frozen water was not the culprit. I can only speculate the cause, but I am guessing that the extreme cold temperatures that we experienced caused the pipes to shrink in length even more than normal. If they were not originally laid with significant slack (i.e. straight rather than curvy lines, as in pasture #1) the pipes simply pulled apart at the joints. An entire morning was spent reattaching every line. In the afternoon I pressurized the system and it seemed to hold. Later that evening we became aware that our pump was running continuously. I shut the  pasture waterline off in the barn, which stopped the pump. The next morning I found one joint that did not hold after my repairs. Now we have been successfully pressurized over 24 hours. That is one step closer to getting the sheep out to pasture.

In some places the perimeter fences took a beating from the snow this winter. This was especially true in the spots where the fence runs just just below the ridge that separates the pastures from north to south. This winter the heavy, drifting snows poured over that ridge and buried much of that fence line. Once the snow melted the damage ranged from wires being yanked away from plastic insulators (usually destroying the insulators). The heaviest such damage was on the western edge of pasture #2. On this stretch the weight of the snow was enough to break off a 1″ diameter fiberglass pole where it met the ground. 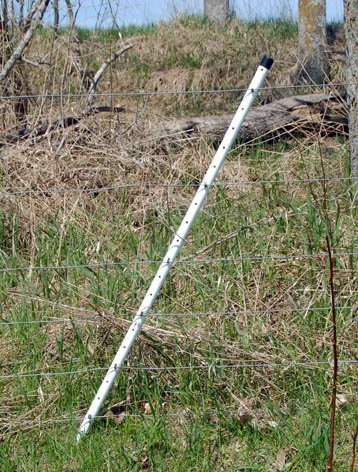 This post has a plate below ground which prevents the post from being driven deeper. The post, immediately south of the broken one, lacks such a plate. It was driven over 6 inches deeper. It might have gone farther, but the bottom strand of wire was also forced into the ground and effectively prevented it from going farther. In the photo below, the lowest visible wire is a couple of inches above the ground. (It actually is 6″ above the bottom wire which should be 6″ above ground.) 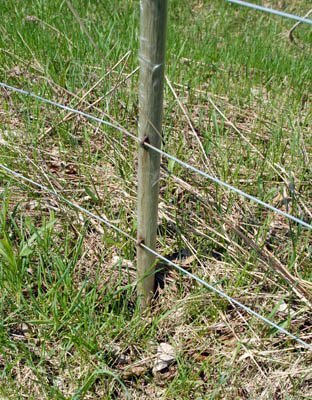 The best solution seemed to be to replace the fiberglass poles with 6″ diameter treated wood posts, which should provide enough resistance to being pushed further into the ground (especially when it is frozen). Here is the first replacement next to the excavated broken post. 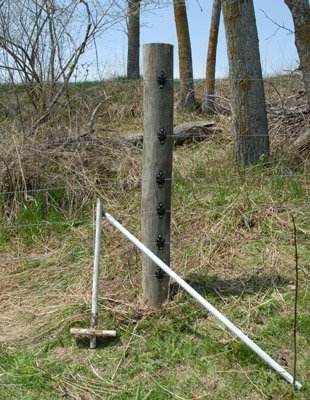 Slightly down the hill is the second replacement post. 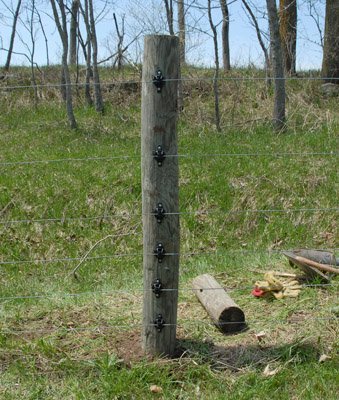 At least digging the holes was about as easy as can be expected in our neighborhood. The soil was soft and damp and the number of large stones that I encountered were minimal. (We like to refer to the larger of these stones as our “permafrost”.) 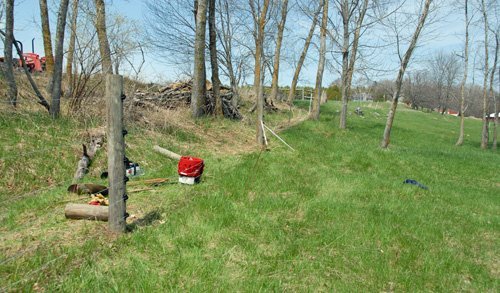 The job was completed two days ago and I was able to test the entire fence’s electric conductivity. With every section turned on, the fence was turning out a charge of over 5000 volts. We are ready to start grazing!

Mother Nature was being contrary with our plans: she threw heavy rain, thunder and lightning at us last night, along with remnants today. Tomorrow is forecast to be sunny, dry and cool. If you happen to hear happy, joyous bleats from a flock of sheep tomorrow, it is probably coming from up our way.