As of today, the 8th of March, I am a bit hopeful that we have finally begun (barely) to throw off the iron grip of winter. For the second day in a row, the temperature has climbed above freezing during the day and the wind has dramatically moderated. There is a noticeable settling in the snow depth. The bank in front of the front door is still mammoth. The bird feeder next to it stands over six feet high and it is still dwarfed.

We cannot complain too strongly about our snow depth. It does represent a significant contribution toward spring moisture levels (at least once it begins to melt!). It has also provided a good blanket of insulation for the pastures (which I assume are somewhere down below).

Even less than a couple of weeks ago we were starting to believe that winter would not end. We try to schedule shearing for the flock about three weeks before lambing begins, i.e. late February. Usually by then the weather has already started to moderate and the temperatures are warm enough for shearer and sheep alike. Not this year! A blizzard delayed the arrival of our shearer for over two days. Once we finally got started, it was still necessary to button down the barn as much as possible to make it warm enough for all concerned. As soon shearing was completed, we took a day to rearrange the barn and then give the flock their annual CD&T booster shots. Nearly everyone was also immediately fitted into clean jackets to lessen the drafts and keep the new wool clean. At that point the weather again turned decidedly colder. We decided to close off the opening between the main barn and the addition, as the wind and cold tend to move directly from the addition into the main barn. It is amazing what a difference in temperature occurs thanks to two sheets of plastic over the two openings between the areas. The rams are normally housed in the addition and now would have been further chilled if it was sealed off. So they had to be moved into the main barn (in the area in which we had just been shearing). It did at least provide entertainment for the ewes and rams being suddenly so close. 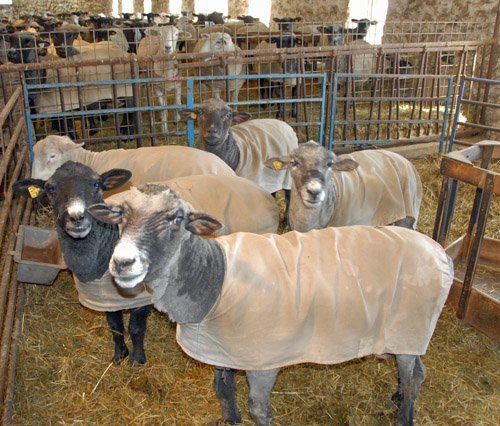 The final effect was to raise the temperature enough to stop the sheep from shivering. Feeding additional hay and grain served to stoke their ruminant engines. Our biggest concern with closing up the barn as tightly as we did was the lack of fresh air turn over. When it was not blowing a gale and/or down into the negative teens in temperature we ran the barn fans or cracked a door. For the last two days it has warmed up enough that the top of the two dutch-doors could remain open during the day.

All of this peace and relative comfort will soon be disrupted. Tomorrow the plastic comes down regardless of temperatures. The ram pen in the addition gets rebuilt, re-bedded and then the boys are moving back. The reason for the move is that lambing is fast approaching and the ewes will need more space. Starting in five days we should be seeing the first of this year’s new lambs. All we can hope for is that the frigid weather does not return at the same time.

In the interim, Gretchen has been frantically doing the final skirting on all the fleeces. So in answer to all who are wondering when fleeces will be available, it will be “soon”. But first we must finish lambing, which if all goes well, will last a bit over three weeks. If you are not on our e-mail notification list now is the time to let us know via our Fleece Contact Form.

We have been especially pleased with this year’s crop of lamb fleeces. Conchita was my orphan lamb from last spring and she is keeping good track of everything. So I am sure she we not let us forget to announce the sale date for fleeces. She has her eyes on all of us! 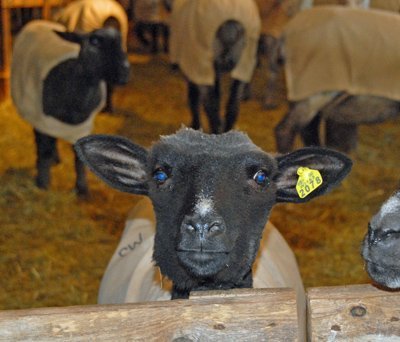