We finished shearing exactly two weeks ago. Lambing is scheduled to begin in three days. In between shearing and lambing, we (especially Gretchen) have been busy doing final skirtings on each of the 124 fleeces. Hopefully the fleeces will be ready for sale sometime in early to mid April. When exactly the fleeces are ready for sale depends largely on how well lambing goes.

Shearing went quite well. Mother Nature gave us a bit of a break weather wise. We fit shearing in between snow storms so that shearer and our out-of-town helpers were able to travel without major problems.  Temperatures moderated enough that, with the barn closed up, the flock only showed some discomfort for a couple of days. Now they have acclimatized. 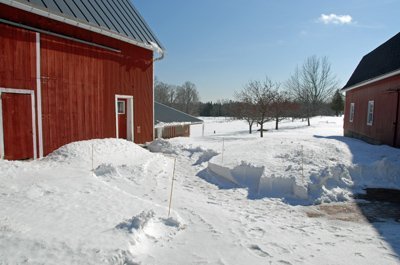 We have an abundance of snow of the ground for once. Much of the snow arrived just before, during and after shearing. It meant that we did not have time to move any of it until it became hard packed and frozen. Even if I could have moved it, the tractors are drifted in down in the machine shed and we have no where to go with the snow even if we could move it. The moisture is always welcome, but we fear a rapid thaw and the resulting flush of run-off around and through the barn just at the moment lambing picks up.

Shearing is always the first time that we get a good idea just how many of our planned breedings were successful. The week prior to shearing, a few udders were beginning to peek through the fleeces and body widths seemed to be increasing. In the two weeks since shearing (sans fleeces) there have been few questions as to who is pregnant. We had tried to breed 36 ewes last fall. We knew that one was never bred. Of the remaining 35, all but one seem to be pregnant. Based upon breeding dates, lambing should take place within an 18 day window. In reality, a couple of ewes will deliver a couple of days ahead of schedule and a couple will wait a day or two extra toward the end.

The biggest unknown was whether any of the other ewes that we did not plan to breed have become pregnant. It may be remembered that four of the rams got in with all the ewes four nights after we had officially terminated breeding. If there are to be any lambs resulting from that night of partying, they will not be arriving until April 6th. It is therefore, a bit early to detect if there are any additional pregnant ewes. At this point we are suspicious of Umlaut. It will be hard on all of us (shepherds and sheep) if she or any others are pregnant, as they will be delivering over a week after the last scheduled planned pregnancy.

Tonight (Saturday) is the last one in which we will sleep through. With the first deliveries scheduled for Tuesday, experience has taught us that we may have the first arrivals beginning Sunday. The first couple of lambing jugs are already set up. Our lambing kits are supplied. My first 2 AM barn check will be scheduled for Monday. Hopefully we are all set. It is quite obvious that some of the girls are primed and ready!

Baby (or Babies) on Board!