We have experienced such a strange winter. To date our total snow fall has been miniscule. Temperatures have fluctuated abnormally and have tended to be on the high side as far as averages. We have had a couple of overnight lows below zero (our lowest so far has been -3° F (-19° C). On the other extreme, our high temperatures have reached into the mid 40° F (4°C) range. The biggest concerns for us, and probably for every other farmer in the area, are the overall lack of moisture, the lack of snow cover and the high temperatures. The lack of a blanket of snow threatens the safety of the alfalfa, especially if warm temperatures start to result in thawing and re-freezing of the upper levels of the soil. The warm temperatures also have come near to the point where fruit tree buds begin to break dormancy and swell. A following major drop in temperatures can damage the buds enough to compromise this spring’s cherry and apple blossoms and therefore the cherry and apple crop. The results from lack of moisture is virtually self evident. The greatest frustration is not being able to do anything to combat the problems caused by the weather.

On a personal side, there has been no snow for us to cross country ski or snowshoe. Outside fun and chores have been limited. It has meant that both Gretchen and I have had time for fiber projects. Hopefully, we will have lots of items finished before the gallery opens again in May. I currently have two projects going on two separate looms. My smaller Louët loom has been home for numerous scarves, most of which have, in someway, used some of our naturally dyed yarn. 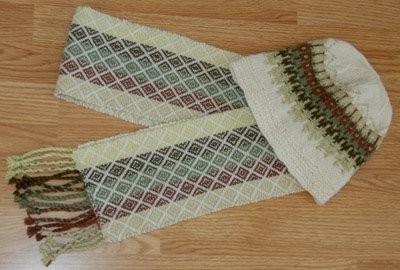 Scarf and hat – all natural dyes

Weaving relatively narrow projects on the Louët also gives me a nice change of pace from the work on the larger Glimåkra loom. This winter I also tackled my largest ever weaving project. The project will end up as a blanket over 90″ wide. I do not have a loom that wide and if I did, my reach would not be great enough. To achieve that width I am weaving the blanket in “double weave”. For those not familiar with weaving, this process involves simultaneously weaving two layers, one above the other. On the right edge the upper weaving curls around and is connected to the lower level. The left edge is open. Once the blanket is off the loom it will unfold into one single piece. It is a weaving process that seems to go slowly (since two layers are being woven at a time). It is also a process that uses a prodigious amount of yarn. The picture below can only give an idea of half of the project. To see the other side one currently needs to crawl under the loom (which also makes it difficult to know if there are mistakes on that side). 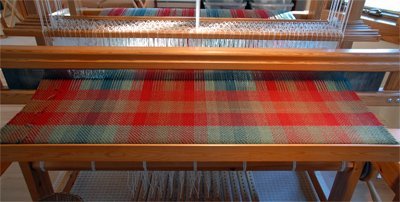 The blanket will not be for sale, nor is it intended for our own use. It has a much more interesting history. It is a commission project for one of our long term wool customers. Commissions are something that I do not normally do. However, I was too intrigued to pass up the opportunity. The yarn is all handspun. The vast majority of the yarn is the product from many years of Quiche (one of our white sheep) and Uhlayla (one of our colored sheep). The wool is well traveled. Once the fleeces were shorn, they either went to the customer or directly to one of two fiber mills either in Wisconsin or California. There the wool was washed and carded into roving. It then went all the way to the east coast and the buyer. Over a number of years she has spun and blended the yarn. The next stage was to dye the yarn. Then it returned here, “home” again. Once here I measured the yarn, set it up on the loom, and have been weaving off and on this winter. I had to pause for a couple of weeks to wait for more yarn to be spun and dyed. With any luck I should have the blanket off the loom before we begin lambing next month.

Gretchen’s projects have been much more diverse than mine. She has been knitting, weaving on a rigid heddle loom and felting. The resulting output has included a large number of mittens and hats (some of which will go with my scarves), handwoven pillows… 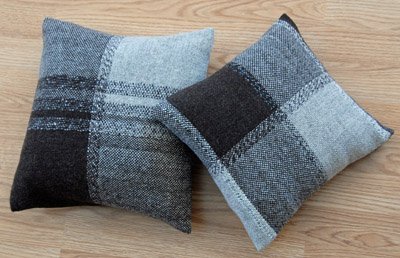 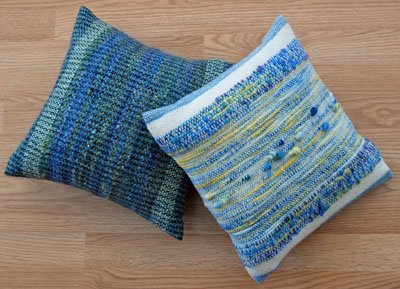 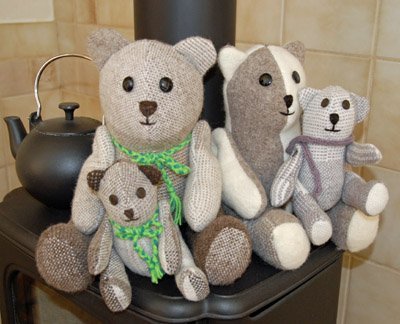 (Still waiting additional clothing before they dare venturing outside)

Shortly all of these projects will have to either be put on hold or fit into a different schedule. Weather permitting, the flock should be shorn before the month is out. Shortly thereafter, lambing begins again. The first expected due date is March 7th (five ewes). Even if the weather turns bad, lambing will not stop. That will be a good sign that spring is coming…sometime for sure.