Weaving for the New Year – Part 1

Finally, we managed to get a good snow fall! Before the end of December a dandy storm blew in from the east (an unusual direction for us). When it was over it left about a foot of snow. It was hard to measure since the drifts were deep in some places and the ground bare in others. Now a week into the new year and much of the snow is melting. In its place we are promised much, much colder weather than we have had so far this winter.

The sheep are comfortably settled in the barn. Their next big event is shearing, not until late February or early March. That schedule leaves the two of us a bit of time for serious winter weaving. Gretchen is already finished with a couple of sets of pillows that she has made on her rigid heddle loom. I have two projects to alternated between. On my smaller loom I finished the scarf mentioned in my last posting. I am now well into a scarf based on a different pattern than I have used before. On my larger Glimåkra loom I am just getting started with a new blanket pattern. In reality it is not truly “new”. Each year I try to weave a set of blankets based upon a pattern that I have not woven before. This year we opted to return to a pattern I used in 1999! It is “new” in that it will be woven on my newer   Glimåkra. This loom has two extra harnesses and treadles than the loom I used in 1999. It gives me more flexibility with the pattern, so that the end product will be slightly different than the first time around.

I thought that for the first of these blankets, I will, over the next few blogs, post some of the progressive steps one needs to go through with such a project. I will apologize to those of you who are better weavers than I, as this will sound old hat to you. Hopefully those who are not that versed in weaving will find this interesting. So here it goes….

First, the loom needs to be prepared for the yarn. 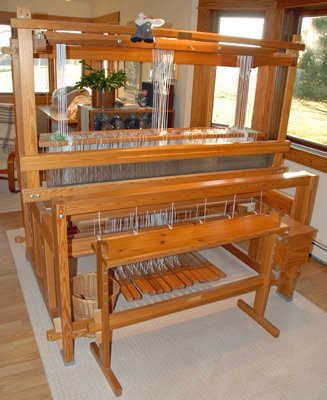 This entailed removing any remnant yarn from the previous project. Then, because this will be a different pattern than the previous one, I need to “re-program” the loom. This means that I have to reconnect the 14 foot treadles to the 12 harness that hang from above on the loom. If you look closely you can see that all but the last four treadles on the right are completed.

Each of the 14 treadles are connected to one of 12 upper or lower lamms, which in turn are already connected to the 12 harnesses. 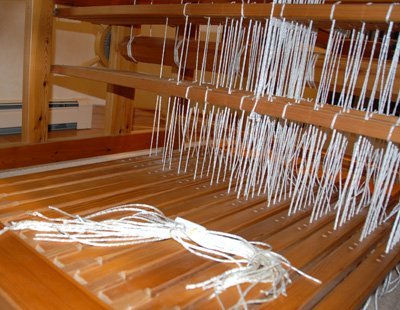 This is the view, from below the loom, from the rear. I am working on the last 4 treadles on the left. The upper and lower lamms are visible above the treadles. Crawling around under the back of this loom is one of the least pleasing physical tasks. There will come a day when I am not flexible enough to get around under here! Based on what I have already written, my first task was already completed when I decided upon a pattern. The pattern is controlled by either lifting or lowering each harness, hence the need to tie up each harness in a unique sequence. When the tie-up is complete there are 168 cables tied to the harnesses!

Now that the loom is all tied up I need to turn my attention to the yarn. Among other things the pattern determines the number of individual lengths of yarn I will need to make the warp (the yarn that runs through the loom). We decided upon three shades of our natural colored yarn: white, a light gray and a medium gray. In addition it will incorporate yarn that was naturally died with cochineal, a dark red shade.  Having selected the yarn I first need to switch the yarn from skeins to balls. 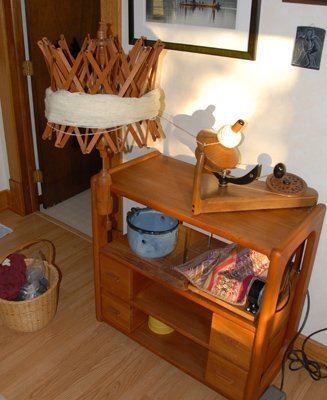 Here is the collection of warp yarn, now rolled into balls. In a sense this pile represents one half of the future blanket. 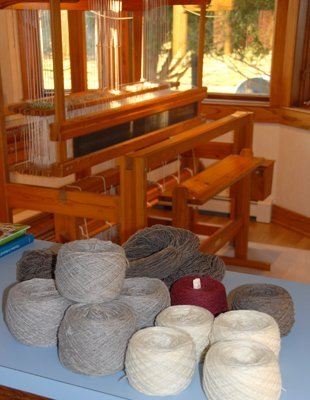 The rough warp will measure 3.5 yards in length. There will be 564 individual lengths of yarn in this warp. An easy “short cut” in the measuring process is to wrap continuous lengths of the various yarns around a warping board. This must be done in the proper order of colors. 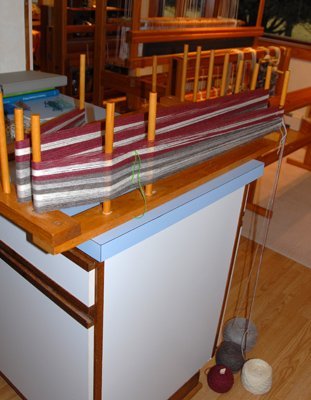 Here one can see the various colors, properly grouped, wound back and forth between posts which are set a total of 3.5 yard apart. The yarn currently on the board is 90 lengths. When I get to about 100 lengths the group will be braided together (to avoid tangling) and then hung on the front of the loom. (For those of you who are weavers, I warp from front to back! I know there are many out there who swear by going back to front.)

I will leave you now to finish measuring my warp. I will return once I can get some of the yarn onto the loom.