Weaving for the New Year – Part 2

As promised I have returned with the new blanket weaving project for 2016. The weather has turned much colder and we have a new blanket of snow. It is good weather for weaving! Here is an account of my progress.

I finished measuring the warp yarn. It was collected in six separate braided hanks, which were each hung from the front beam on the loom. 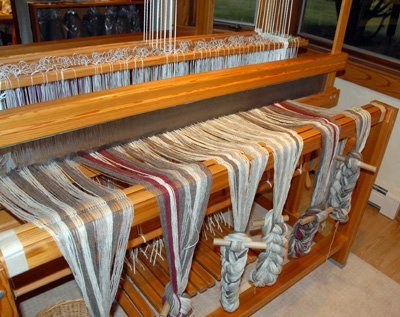 What follows is the slow and tedious process of “warping” the loom. Each of these 564 lengths of yarn must now be threaded, in the proper order, through the reed. The reed is a collection of metal dividers (once made from reeds), which is placed into the overhanging beater. The reed is spaced so that each thread is equally spaced (in this case there are 10 spaces per inch). Needless to say one does not want to leave a space open, or place two threads through one space. I did pretty well this time. I discovered one vacant space in the middle of the third hank, before I had gone too far. It was easily corrected. 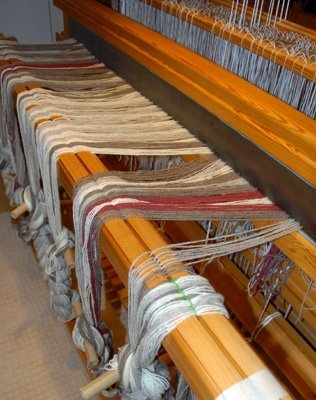 So here we are, the reed is nearly completely threaded. That was a couple of afternoon’s work. But, I am nowhere near finished warping the loom. Now comes the “fun”.

Behind the reed in the beater are 12 harnesses. Each harness has a set of heddles (in this case, plastic loops hanging between the top and bottom of the harness). Each heddle has a small opening halfway down from the top. Each length of yarn from the warp must be threaded through a heddle. It is vital that the heddle chosen is on the correct harness. If it is not threaded in the proper order the final pattern will be messed up. This process is performed from the back of the loom. This is what it looks like from the back. 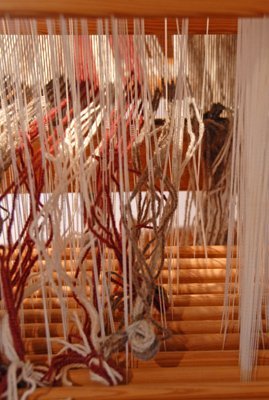 When I have 10 warp threads through their heddles I tie then into a bow, so that they do not inadvertently get pulled back through. This entire process is very tedious. I find that I can do just so many heddles before I get sloppy. So I will stop, rest and then come back later or the next day. Mistakes can be costly. I was half done when I realized that all of the yarn I had through the heddles was 5 heddles off in the pattern. The only recourse was to remove all of them and start over. It took a few days to get through this part of the project. Welcome to the jungle!

Once all the warp yarn was threaded, I tied it to a rod which is fastened to the back beam. Finally, the project begins to look better! 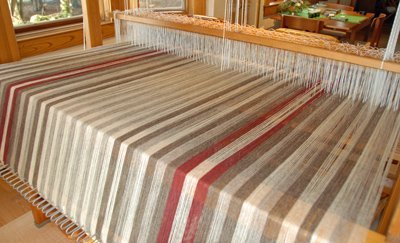 Now the warp can be rolled up around the back beam. Once the other end of the warp finally appears, it will be time to tie it to the front beam. Then it can be tensioned and weaving can begin. I will be back once I reach that stage.