Time is slipping away, as usual. Spring has made a couple of abortive attempts. It seems that Mother Nature cannot decide if it should be warm and sunny or cold and gloomy! April gave us just about every possible variation in weather and emotions. Hopefully, now that we are into May things will move forward.

On April 14th, before the temperatures warmed up to seasonal normals, our flock of Tree Swallows arrived. It is always a joy to see them flying about the pastures, checking out possible nesting boxes. The following day their cousins, the Barn Swallows arrived. There is no question that they are returnees from at least last year. The first couple swooped into the barn during morning chores. Their flight patterns definitely indicated that they had been here before and knew exactly where their nest from the previous year was to be found. Every day their numbers increased. This morning there were at least 16 pairs present (although it is hard to get an exact number since nearly everyone is on the move). They are now in the original barn, the “new” addition and upstairs in the hay mow. Seemingly they are a very happy bunch; at least all of their twittering would indicate it.

Despite the happy swallow arrivals, life in the barn has not been all joyous this spring. The complications of old age has caught up with a number of ewes. We lost Shirley in late February. In March, Prunella died, followed in April by Queenie and Pumpkin. The oldest were 13 years, which is an advanced age for most sheep. Their passing was not unexpected, but they are all missed, each in their own special way.

By mid April we suddenly experienced warm, sunny weather. Finally the pastures began to dry out. This winter the frost never got too deep in the pastures and the surface never really dried out enough to risk repetitive trips with the manure spreader. Normally the composted manure is spread before the “dead” of winter. This last winter I had not even tried to spread the compost. The warmth of mid-April finally permitted the operation to begin. Between the 14th and the 17th I managed to get everything moved. 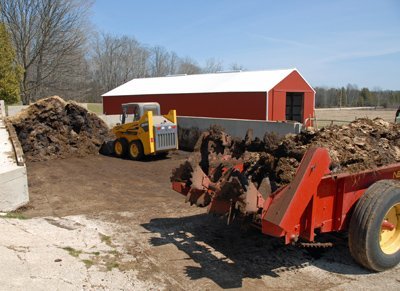 By the time this image was taken the job was on its final day. Already the vegetable garden had received its quota as had pasture #3. The rest of the loads went onto the south end of our hay field. I normally like to get the spreading done much sooner so that the compost has a chance to settle before the green growth occurs. 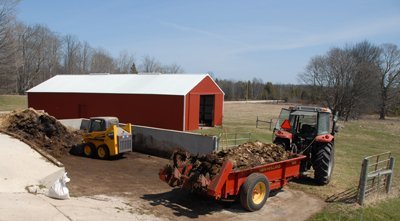 The day after the last load was spread I hooked up the tine harrow and worked over each of the fields to help further break up any concentration of manure. The timing was perfect since on the following day we received a nice steady rain fall of over .6″. One of the pleasures of an otherwise rather monotonous period of driving around the fields is getting to see signs of spring around the edges of the fields or above them. My first day out I watched two large separate flocks of Sandhill Cranes flying slowly north over the fields. On a couple of different occasions I was treated to a soaring adult Bald Eagle circling overhead. That is a sight that even ten years ago was virtually unimaginable.

After the rain, the fields were once again too wet to drive over with the heavy equipment, but since the job was done all we needed to do was watch the fields turn green. I had hoped that we could have continued with the alternating warm sunny days and rainy periods. The rains have slacked off a bit and the temperatures have cooled. Nevertheless I am hopeful that within a week or two the pastures will be lush enough that the flock can seriously begin grazing.

The week after the manure operation was completed we had our annual fleece sale. It has now been 14 days since the sale started. We are not yet sold out. We still have four lovely colored fleeces and four beautiful white fleeces for sale. Should you have missed the sale, but are still interested in purchasing one or more of our fleeces, go to our Fleece Page . I will be taking pictures of the remaining fleeces and (hopefully) get them posted to the next Ewe Turn.