We’ve been on holiday (I think)

Hello fellow sheep and sheepy friends! If you have been wondering about us and our goings on I have returned to get you filled in. Ever since the shepherds started doing all sorts of electrical work for the farm I had been a bit concerned about trying to sneak into their computer. I figured that they were onto us or at least trying to set up some sort of security system to catch us. Queso assures me that it was nothing like that. She claims that they were just trying to make sure that the farm had a more secure electrical system.  For us that would mean, among other things, that we would not run out of water if the public power system went out. I guess that we will have to give those shepherds some credit in that regard. In any case, I figured I would try hacking into their computer again just to connect with the rest of sheepkind.

Since it is winter here, we have spent much of our time in the barn. A few weeks ago that was sort of spooky at times, what with all the construction noise just to the north of the barn. In addition we had frazzled electricians running downstairs into our quarters without warning us they were coming. Thankfully, that is now past history. We have been able to eat our breakfast hay in peace. The shepherds shook things up a bit a couple of weeks ago. It seems they figured that things were getting a little tight in our part of the barn. They were probably correct. We all have a lot of wool now and it does make us a bit bulkier. To remedy that situation the shepherd folks took all of this year’s lambs and made room for them in the “new” wing of the barn. The rams were of mixed emotions in that regard. They lost half of their cushy quarters, but they also got some company: 14 lambs. The boys are always excited about female company, even if it is across the fence! Come to think of it, I guess this rearranging happens at this time every year. We do not get to mingle with the young folks until after we are sheared, the next lambs are born and the pastures turn green. This is probably a sign that we should be getting ready to getting rid of all of our wool.

For quite a time now it has been hard to believe that shearing is getting close. Usually when that happens, it has been cold for a long time and there is a lot of snow on the ground outside. But aside from a couple of frigid days, life here has been pretty balmy. Because of the mild weather the grumpy old bearded guy has been willing to let us spend more time outside on the pastures. For a time we were starting to think that we were on holiday: lots of time in the sun and fresh air and no portable electric fences restricting us to small sections of pasture. It is difficult to believe that this is a picture of us way out on the first pasture, in mid-January. 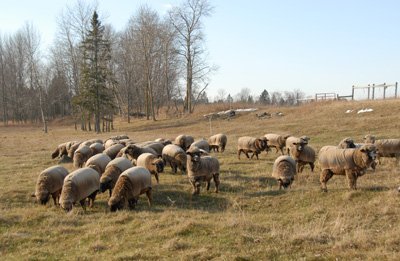 The old guy neglected to tell us that the grass had not been growing. There was very little good to eat out there. You would think that the old guy could have done a better job of raising pasture for us! Nonetheless it was nice to be out there for all that time. 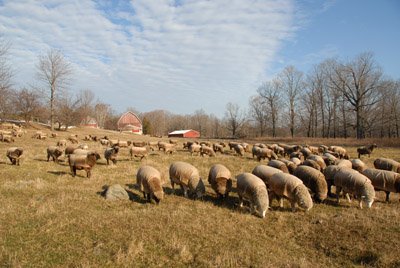 What the old guy does not know is that we had managed to figure out how to open the barn door and go out ourselves. (He thinks that he was just forgetful and did not get the door properly hooked. Little does he know….) Our only problem was that we have yet to figure out how to latch the door once we came back inside. We are still working on that issue. We may have to delay working out that problem since Mother Nature decided to take away our vacation weather. Yesterday it turned into winter. It has been blowing and snowing off and on. The temperature has dropped and it is nice to have the comforts of a clean barn into which to settle. (It seems the old guy and the nice lady did some real work for a change. They did quite a tidying up of our quarters while we were out.) So we are hunkered down and happy. Here is what our once warm pasture now looks like. It may disappear soon in the snow. 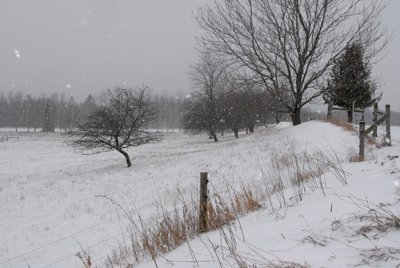