We cannot seem to get over the hump and into steady spring weather. The days continue to vacillate between below normal temperatures and dreary skies and warmth and sunshine. There is even a freeze warning for this evening. Our tomato plants are screaming to be transplanted out into the vegetable garden. Sorry little buddies, it is going to have to wait!

The warm days have been a special delight, when they have occurred. The first full weekend in May, Gretchen managed to get her dye pots warmed up and working. Two days produced some brilliant yellows using Weld and some flashy reds and pinks utilizing Cochineal. Here she is bringing out one of the first skeins of yellow. 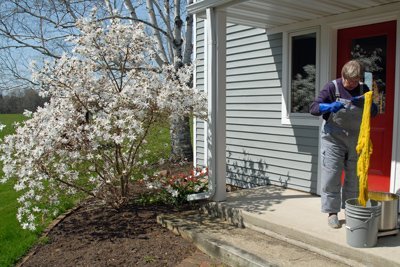 One of the bonuses for her labors was being able to work next to our Magnolia bush, which was in full bloom. It is difficult to see in the photo, but underneath the Magnolia were early tulips also in full bloom, a nice contrast in red.

During the coming week the temperatures fell and we received some scattered, but needed, rain. Dyeing needed to be put aside, partly due to the weather and partly due to the pending opening of the Gallery. Officially we open in less than a week on May 20th. It does look like Gretchen will have everything set up by then (with the possible exception of the flower garden outside the door, which may need to be delayed due to cold weather).

Toward the middle of this week it once again warmed up. The sheep are still not on pasture (much to their displeasure!). In part, this is due to the fact that the pastures are still not growing vigorously enough, but also due to the fences and waterlines not having been inspected and repaired where necessary. My task in the warmer conditions was to patrol the entire fence line, looking for winter or deer related problems. We had one large poplar that managed to fall right on top of a fiberglass post in pasture #2. The tree is now cut up and out of the pasture and a new, larger wood post has replaced the shattered fiberglass one. Over the winter the deer have managed to crash into the fence in a number of places, especially in #3. Wires have now been straightened and insulators repaired or replaced. The water line is in pretty good shape, with only slight damage from the winter temperatures. As soon as it warms up again, those repairs can be made.

Beside patrolling the fence lines, I also like to check the perimeter of our large hay field to make sure that there are no branches that have fallen along the edges which would pose a hazard to the haybine when it is cutting time. It is also an opportunity to get a feeling for how the hay crop is developing. Lastly, it is a pleasant springtime walk. I was struck by how noticeable the deer browse line was on the cedar trees along the south edge of the field. 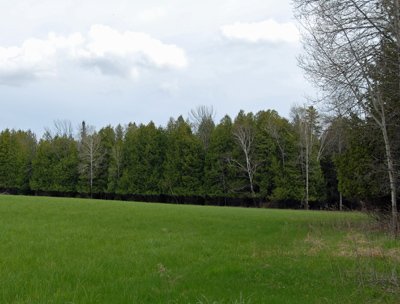 Just to the right of this scene, to the west of the hay field, is our ash/cedar wetland. This time of year it is indeed wet, but it is also quite beautiful. Over the last couple of winters we have removed quite a number of ash which either have been toppled in wind storms or which have simply died. The result is a significant increase in sunlight at ground level. Due to the extra sunshine, the resident population of Marsh Marigolds have benefited tremendously. They are currently in full bloom! 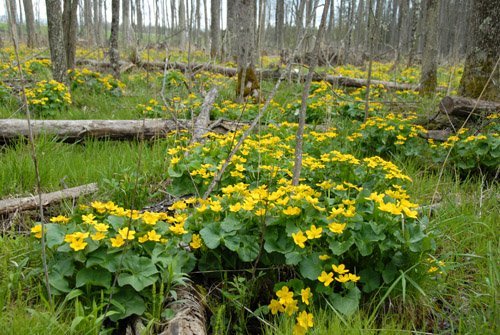 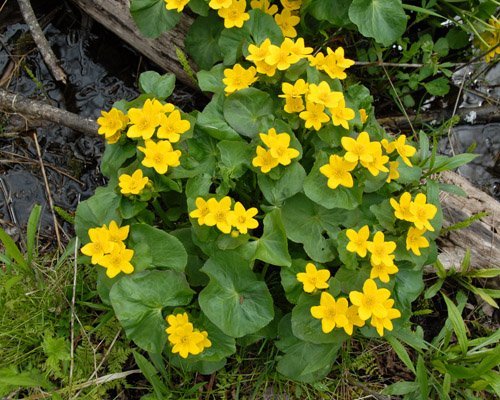 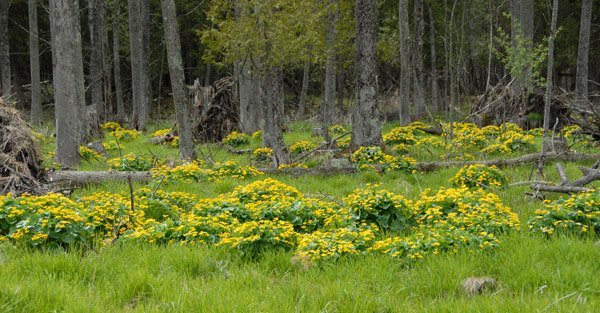 With any luck, later this summer a good stand of Cardinal Flowers will replace this blaze of yellow with equally intense red.

Heading home from the walk, the farm stands out nicely against the green of the pastures. The sugar maples and birches are just starting to show signs of leafing out. It was a good day for a hike! 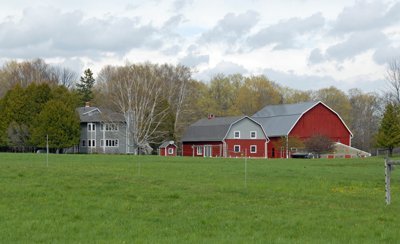