It is high time that I let the world know what has really been going on with the flock. The old bearded shepherd guy would have everyone think that he has been ever so busy, what with baling hay and such. But after all, it is what he is supposed to do. There is no need to give the guy any slack. (If you have not already surmised, this is Nanoo Nanoo writing. The world does need the ovine perspective!)

We have been quite  busy, which is why I have not had time to contribute more to the blog. What the old bearded guy forgets to tell everyone is that we have been harvesting hay nearly everyday since mid-May. We have now been through just about all of our regular pastures twice. We seem to be going through the pastures faster of late. It has not rained very much for the last four weeks. (I guess that we cannot blame that on the  old guy.) As a result, the pastures are just not growing anymore. We do not have as much to eat in the same area as earlier, so the old shepherd guy gives us larger areas to graze every day. I certainly do hope that we do not have to start eating that baled hay while we are on pasture (like we did in the last drought of a couple of years ago). It just does not compare to fresh green grass and clover. The old shepherd guy is not letting the rams out on pasture anymore. He says there is not enough for them. The same is true for the ram lambs. They took those eleven boys away from us as they were behaving a bit too much like their fathers. They are also relegated to eat baled hay in the barn. Rumor has it that they are still getting grain, unlike the rest of us. 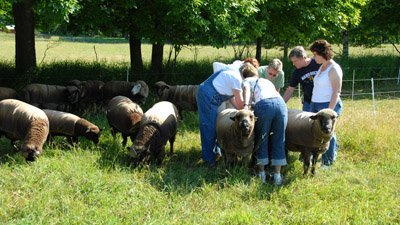 In addition to harvesting forage, we are keeping up with our job of educating and entertaining the guests from the bed and breakfast. It is a difficult task but we are up to it. The bunch with the nice lady in the picture includes a couple from Milwaukee who we remember from previous visits and some new people from Arkansas. 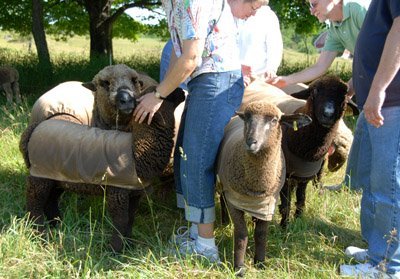 The picture is of a bunch of us showing off the wool under our jackets. We even are getting the lambs trained for duty. That is little Wizzbang, Tabitha’s daughter in the foreground, learning the ropes. She really has become quite the little “suck-up”. Shadow is getting scratched behind the ears while she shows of her fleece.

I think that just about all the lambs that are getting jackets now have them. (Wizzbang has hers.) The shepherds have not given out any more of them recently. By my count there are now 28 lambs wearing coats. That is good; that means they get to stay here! A lot of us adults are getting our jackets replaced. It is about time, since we have been growing lots of wool and those of us who had lambs are starting to fill out a bit after producing all that milk. 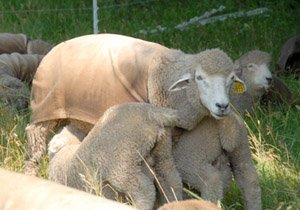 Puss Puss with her twins

(It is also about time for the lambs to learn that they cannot have a drink whenever they want it! Someone needs to tell Puss Puss to stop feeding those twins so much.) In anycase, it is nice to get roomier jackets, especially since they are cleaner than the old ones which now are soaked in lanolin.