It is still June and every aspect of life at the farm seems to be running ahead of schedule. In many ways it is not just a steady pace but an acceleration! This spring we began grazing the sheep early, based upon the depth of the forage in the pastures and its rate of growth. The flock is now three days away from finishing grazing the “orchard” pasture. The significance of that event is that it means that we are four days away from beginning the second rotation of grazing, an event that usually occurs sometime in July. Despite the early, rapid start we still have not been able to keep up with the rate of growth in the pastures. The “girls” are now being asked to graze grass that is much too deep to be soft and tender. For the lambs, the beginning of the grazing day means moving through grass that is often head high. Nonetheless they all seem to be doing well. By the end of the day their pasture has a different look.

For a time we were becoming especially concerned about the lack of moisture. A good series of heavy rains at the end of May gave all of our hay a good healthy boost. Unfortunately, that rain was not followed up by timely subsequent rains. It was four weeks before we again saw any significant rain. Hopefully the last few days’ moisture will keep everything growing again.

The first flight of young barn swallows are off the nests. The morning ritual of taking the sheep out to pasture includes a sizable aerial armada of swallows, feasting on the bugs that take flight as the sheep ramble through the deep grass. Grazing the “orchard” pasture gives the young swallows a wonderful perch while waiting for their parents to serve them fresh breakfast, lunch and dinner. The volume of swallows also makes photography a challenge. One never knows when a swallow will suddenly swoop into the picture. It looks like we are growing monster swallows in these parts! 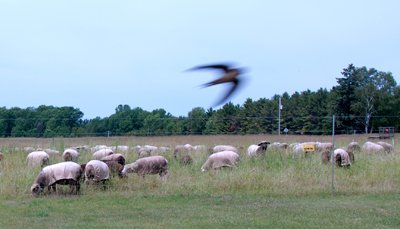 The accelerated spring into summer schedule has at least allowed us to get a good start on our vegetable garden. The last few days of rain has temporarily put haying on hold. However, it has meant that I could get the garden nicely weeded and cultivated. Yesterday was the first time in at least four years when I can claim to be caught up with weeding the entire garden. Unlike last year I will not be hunting down carrots and onion that were totally engulfed in weeds. The special benefit from working in the garden has been that I have had the sheep quite near by to entertain me. (I suspect that they feel just the reverse, i.e. I am providing the entertainment for them!) 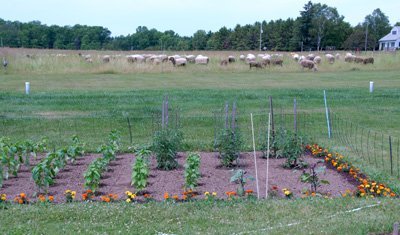 The marigolds are already starting to get into production for summer time dye sessions. The tomatoes are blooming and at least some of the sweet peppers already carrying good sized peppers. Now all I need to do is get my back straightened out and figure out how to stand up straight enough to bale hay this coming week!