It has been a long while since I last posted to the blog, but it looks like it is about time now! Greetings everyone, this is Brie writing after a long winter’s absence. Some of the flock felt that I had best keep a low profile for a time. I had a bit of a disagreement with those shepherd folks. It seems that they did not take too kindly to my mothering talents. I will admit that I was a bit confused when my lamb, Dante, arrived. It was, after all my first time at being a mother. But, despite all the gnashing of teeth and muttering from the shepherds, Dante and I got our act together. (Actually, it was mostly me making adjustments, as Dante was always cool.) But I forgive the two shepherds for being squirrely. We are still friends, now that life is back to normal.

Well lots of things have been happening with us, but for some reason the old bearded shepherd does not seem interested in letting anyone know what’s up. Queso (the flock photographer) and I talked it over with some of the senior flock members and it was decided that Queso would dust off her old camera and take a few pictures while I tried to synthesize the high points of life with the flock.

It isn’t that the old shepherd is as grumpy as he sometimes is, but he is up to all sorts of crazy stuff recently, most of which is hard for any of us to understand. Here are just a couple of examples. The last time he wrote something on the blog he was so concerned about rebuilding fences, sticking be posts in the ground and generally fussing about how tough the winter had been. But we all know about the winter, so what’s the deal? Once we got outside the barn we realized the old guy was up to all sorts of odd stuff. Just look at the paint job he is doing to the gallery. Have you ever seen such a mess? You’d think the guy had more talent! 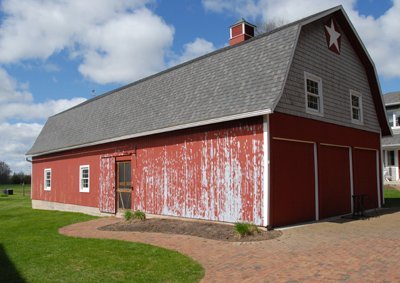 It seems that he is having trouble just holding a brush.

Well, while he was trying to camouflage the building, we did finally get to go out on pasture. The first day it was just us moms with our lambs. It gave the youngsters an opportunity to get used to going through the barn door and to find out what wonderful stuff green grass is. 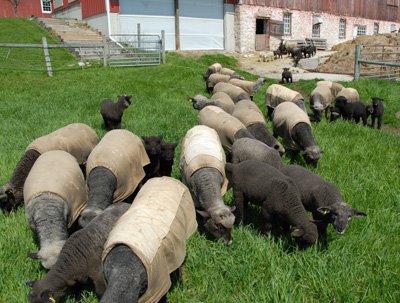 So here we are, the first few minutes outside. Some of the lambs have yet to venture down the slope onto the pasture. It can be a bit spooky the first time out! But boy was it great to be out in the fresh air and to eat the lush new pasture. It is still hard to believe how slow everything is growing so far this spring. When we got out one of the first things we noticed was that there were virtually no leaves on the trees yet. 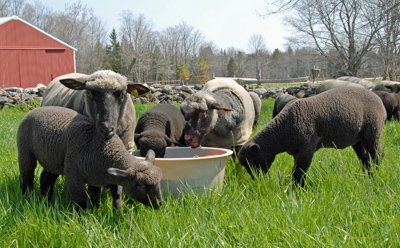 One of the new experiences for the lambs was drinking out of the big, portable water buckets the old shepherd sets up for us. Here is Yippee second on the left with Annette in the middle, plus a bunch of the lambs investigating.

Once we got the youngsters organized, it was great to spread out over the first section of pasture. It is a really pretty sight if you ask me.

Life does not get much better than this. There was actually too much grass for the bunch of us to eat. Of course it took the lambs a bit of time to learn how tasty the grass is, but they caught on quickly. This little gal is Dorte, one of Ysabel’s twin girls. 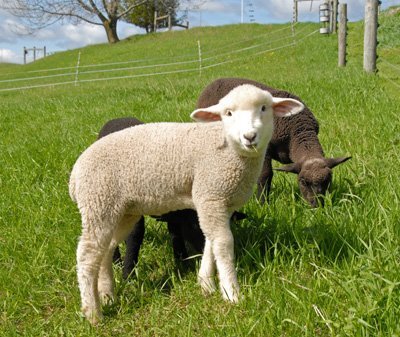 Sometimes it is hard to keep the grass from sticking between your front teeth while they are still growing!

The next day the rest of the ewe flock joined us on pasture. That was a good time for all of us. It is good to be able to share the pasture with all of our young and old friends.

So here we are, working our way south, down what the shepherds so creatively call “pasture #1”. As I write this, we have already finished that pasture, along with the next one (you guessed it, “pasture #2”). Today we stayed inside because of thunderstorms and it may be the same tomorrow.

Through all this, the good old grumpy guy is still acting a bit confused. We noticed that he was settling up our fences and water tanks up the hill in “the orchard” (you know the place that has no trees!). I think he forgot about pasture #3. That’s too bad, because there is some especially tasty forage out there. But then again, it will be good to be in the orchard, where we can see a bit more of the world around us and the grass is pretty nice there too.

So there you have it: you are up to date on the important news from the flock. Respectfully submitted,