Friday, 15 March – The girls let us get a little rest last night and today, i.e. we have had no births since Winifred’s yesterday afternoon. Mother Nature was not as kind however. Overnight we received two inches of snow. At least without extra lambing chores I was able to get the driveway and path to the barn cleared off. At the same time Gretchen had an uninterrupted day skirting fleeces. A bit of extra rest would have been nice, but could only be dreamed of.

At evening chores Walnut told us that we were back on watch. She was uncomfortable and appeared to have dropped. She waited until 10 PM to deliver two medium size ewe lambs, Cashewe and Coconut, who insisted upon heading to opposite corners of the barn. After we scooped them up and got everyone into a jug, life was much less chaotic. We had been concerned about Walnut’s milk supply as she had a touch of mastitis last year, but she seems to have a good supply to start with. That’s an extra relief!

Saturday, 16 March – Now they are playing games with us. Unabelle and Zahra are slightly “overdue” and Annette is due tomorrow. No sign of lambing the entire day and evening. At least it afforded us time to get jackets on the first three ewes that lambed in addition to trimming their hooves. Tomorrow they should be ready to start the first mixing pen.

To bed a bit earlier, but I still had to set the alarm for the 2 AM barn check.

Sunday, 17 March – Unabelle finished lambing just before I got to the barn at 2 AM. By then both the ram and ewe lambs were up and looking for nipples on which to nurse. We were a bit concerned as Unabelle seemingly did not have much milk. We left them at 3 AM knowing that we would have to monitor the milk issue. At 6 AM the two lambs appeared to have gotten sufficient milk. They were up, active and not complaining. We weighed them so that we would have a bench mark for whether they were getting enough milk.

On top of it all, it was cold this morning: 8° F (-13° C)! Those temperatures are not fair. We purposefully have pushed lambing later into spring to avoid the cold, yet here we are. It appears we will have some more nights with comparable lows. As long as we do not have strong easterly winds the barn is holding temperatures pretty well.

Annette was not eating breakfast, but waited until mid-morning to go into labor. She delivered a large ram lamb unassisted at 10:20 AM. She was another first timer, and darn it all, she just could not quite get the hang of bonding to her lamb even though she seemed to want to. In the jug all she wanted was OUT. We set up the higher fencing; stripped out some milk to tube-feed the lamb and to get some oxytocin flowing in Annette; gave her food and water and let them work on their relationship. At least she was not rejecting the lamb. By 1 PM they are standing together and she is letting the boy, Claude, nurse. 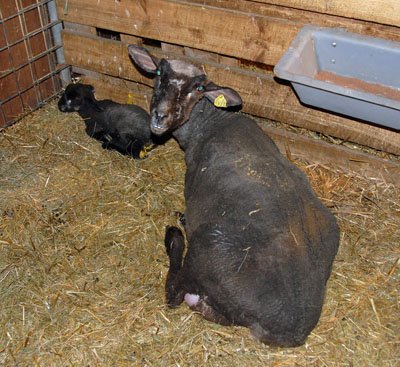 The first mixing pen is established. Annabel, Yuliya, Yvonne plus assembled lambs are now in their communal home. The lambs are having a ball and driving their mothers crazy. This is a good time!

Zahra got us caught up on the lambing schedule. At 1:15 PM she was in labor and by 1:45 had delivered a big, wrinkly, white ram lamb. This was her first delivery and thankfully she renewed our faith in good mothering genes. The little guy was licked squeaky-clean. Zahra did everything right and was exceedingly cooperative on top of it all. One problem popped up however. It was obvious that by evening chores the lamb was not nursing, in addition to which he was cold and shivering. We stripped out some colostrum and tubed him. By 8 PM his condition seemed no better so we repeated the milking/tubing routine. While he still shivers he is, at least, warm and dry. I am not sure if he will survive the night.

Monday, March 18 – Zahra’s boy Clancy survived the night and the cold. This morning he is nursing contentedly. Hurrah! 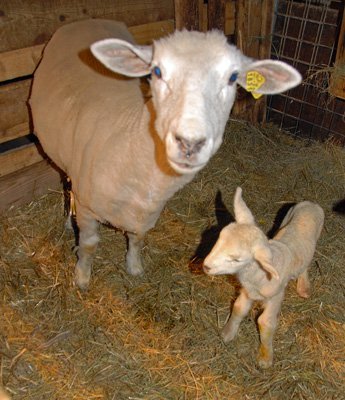 More good news. We let Æbleskive free from her stanchion this morning. Her lamb, Cupcake, had definitely thrived on unlimited free access to milk. She has gained over 1 pound a day since birth! Their relationship seems to have been resealed and so far they are bonded as if nothing negative had happened. Hurrah one more time! 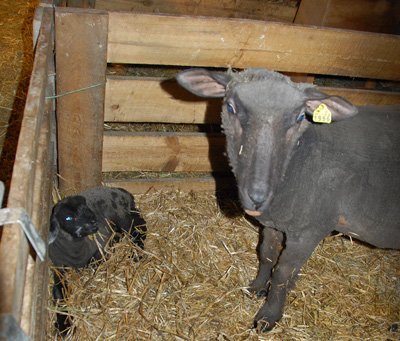 Æbleskive with a 15 lb Cupcake