The Scandinavians have a term that describes the transitional period from late summer just before the arrival of fall. In Danish it is “sensommer”. Like so many words in different languages a literal translation does not always capture the true feeling of the word. Thus it is that “sensommer” conveys something more than merely “late summer”. Quite often it seems to be a time of year that we only briefly experience in the upper Midwest. This year seems different. At the moment we are in a period which more closely resembles the Scandinavia season. Days are cooler than normal and alternately blessed with sun or rain. Nights are cool, but not uncomfortably so. Fall is not here yet, but one senses that it could either arrive soon or dally around a long while before making an appearance. In many ways I truly sense that we are experiencing sensommer.

Gretchen has been busy with the dye pot of late, taking advantage of some of the late summer flowers, berries and mushrooms. As I write, the first batch of yarn has just been removed from a dye-bath of Buckthorn berries. Buckthorn is an alien, invasive scrub which grows to tree size. Its presence is not appreciated and we make a concerted effort to limit its spread. But we can have the best of both worlds: use the berries as much as possible and still try to eradicate the plants. Having said this, I must point out that its berries make a wonderful dye. The resulting color is usually a deep avocado green, which is extremely surprising when the berries appear quite purple at picking. 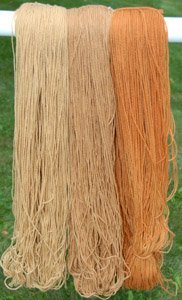 On the future dying agenda is a large mushroom which rapidly appeared in the front lawn after our first heavy rains of the summer. Dye color is unknown; it may be a total waste. The wild Goldenrod is starting to bloom in full force. It is always dependable for a good dying session or two. We are also in the midst of dying with leaves from a couple of species of eucalyptus tree. No, we are not able to grow eucalyptus in our climate. However, one of our good wool customers from California provided us with a collection of dried leaves from two different types of trees. Since the leaves are dried, we have been able to dye with them whenever the time was suitable. So far they have yielded three different shades of orange, the last batch being the most intense.

Of late we have been able to visually experience “reds” that one can never expect to reproduce with a natural dye. As I was attempting to bale hay between rain storms last week I noticed what appeared from a distance to be a red survey stake in the 20+ acres of woods just west of our large hay field. I thought it strange that someone would be placing a stake in the woods because: 1) it is our land and no one had contacted me about it, and 2) the woods is a wetland, primarily an semi-open ash and cedar swamp much of the year. I promised that once the hay was baled I would return to investigate this intrusion into our domain. When I returned I 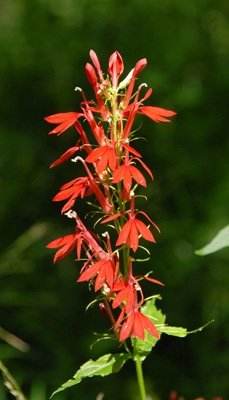 discovered that the “marking stake” was actually one of many Cardinal-Flowers (Lobelai cardinalis) in bloom. For our area it is a relatively rare flower which blooms in late summer usually along the edge of dry seasonal creeks, one of which borders our woods. I am used to seeing their blooms along the creek, but this was the first time I have seem them in the middle of our woods. Once I slogged my way deeper into the woods I discovered that the flowers appeared to be everywhere where the deepest pool of water stood in early spring. If there ever was a sign of Sensommer, this was it!

As if wanting to add to the late season color festival, the Monarch butterflies are on the move. It seems that it has been a good year for Monarch, based at least upon our casual observation. Unfortunately the same cannot be said for most of our usual species of butterfly. Their absence has been significant this summer. The last Monarch generation of the year is now emerging and intent upon stocking up on energy as they begin their flights to Mexico. The Purple Coneflowers in our garden have been a special favorite for them this year. Here’s wishing this fellow and the rest of his tribe a safe journey to the south. 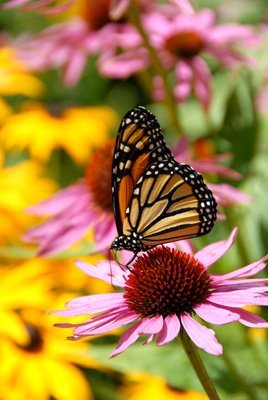